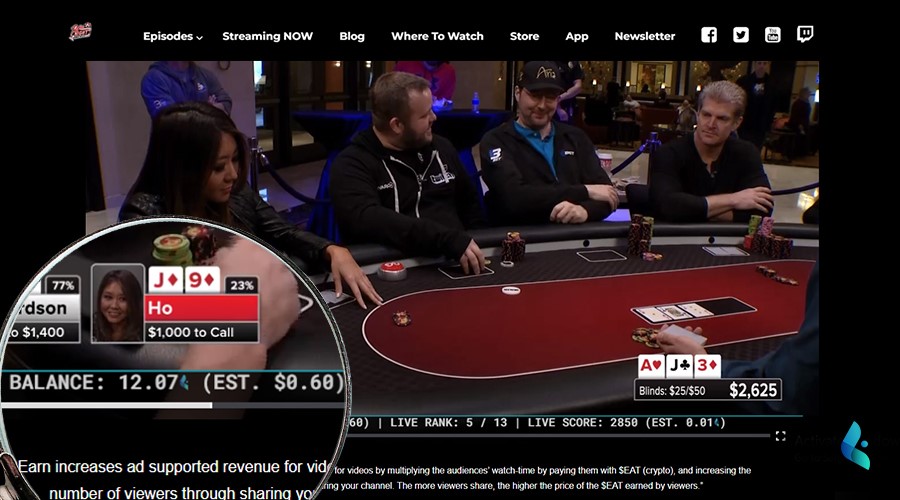 The world is calling for change and Edge Video is answering the call. Web3 continues to pique global interest, and viewers want to be a part of the reformation. Conventional sites and web2 traditions are being pushed aside for a newer, more advanced technological, blockchain-powered successor being developed in labs and innovative minds.

In an ideal web3 world, viewers are an active part of the streaming platforms. Like Griselda Gambaro’s immersive theatricals, which were needed at the time of reform to elevate the public from exploitative depths, the web3 video experience will allow viewers to transcend the “consumer” tag to become part-owners of the web itself.

Edge Video aims to utilize this concept by integrating the live streaming experience with this transcendental revolution, to create a community that mutually benefits both content creators and viewers alike through generating a profit-maximizing concept underpinned by the Edge Activity Token—the native currency of its platform.

Edge Video CEO, Joe Ward, states in his article “EDGE: Web3 for Live Video”, that according to Nielsen, when broadcast TV, cable TV, and video streaming were compared in terms of audience share, cable TV came out top with 39 percent while streaming video accounted for around 26 percent of all viewing shares. The public’s acceptance of YouTube Gaming and Twitch, which have more than 15 million daily active users demonstrates the incredible expansion of video streaming platforms. Twitch serves as an excellent example of how advancements in video streaming are pushing across industries to satisfy customers’ growing needs for interesting and interactive video experiences.

Conclusively then, there is high demand for interactive, live video streaming content. Viewers like to feel involved with their favorite entertainers, and pre-recorded content lacks that sought-after need.

Live streaming is a technical area, and technicalities demand the necessary funds needed to overcome them. Some broadcasters and social media firms are compelled to favor a profit-first business model; they impose high taxes, charge for streaming, or look for alternative revenue streams like sponsored or paid commercials due to expensive infrastructure.

These business models and their use of paywalls, logins, cookies, and targeted ads[1] make the user feel exploited. Then, as capitalism breeds innovation, the viewers resort to using third-party ad-blocking software that, although maximizing their utility of satisfaction, minimizes the profits for the content creators. The question then remains—is there a better way to stream content, a practice that would benefit both the viewers and the creators.

The answer is “Edge Video Player”. What if, for a second, we carried the assumption that the authentic live-streaming experience, just like digital currency, was never truly meant to be operated on web2 platforms? Keeping this assumption, and all that we know about web3 and blockchain technology, Edge Video has developed a creator and viewer-friendly platform that fills this gaping hole in the market.

Optimizing storage space is crucial when installing a live-streaming network, especially given the inescapable large flow of data. To make use of the collective data storage space provided by the viewers dispersed among each network participant, a decentralized Content Delivery Network (CDN) is essential. In this regard, publishers and content producers might utilize the free space by transforming it into a reliable data distribution mechanism (mainly in a peer-to-peer format). A publisher may opt to distribute and route the video for streaming via the dispersed web of relay nodes because the network self-heals and self-organizes. As a result, the network can shrink 100GB or more of data to just 100 MB, conserving server traffic.

A key component of EDGE Video’s strategy to create a genuinely decentralized video player platform is the Watch2Earn functionality. By using incentives to encourage more people to join the effort to develop a standardized, interactive live video streaming network, Edge Video aims to make true to its promise, and kick-start the web3 video revolution. Viewers will be compensated with $EAT (EDGE Activity Token), and they can use $EAT to purchase fAICEs.

Viewers earn by participating in live videos, tagging celebrities, owning NFTs, and streaming live videos on the network. What else? With greater involvement and by viewing premium content, tokens can be earned more quickly.

The more popular the personality, the higher the earnings. Their cutting-edge AI tool also enables publishers to broadcast content based on audience demands, with viewers earning money for watching content that interests them.

Rather than broadcasting fixed channels, Edge Video allows for the creation of personalized playlists without the need for an encoder for each playlist or stream. Not only is it a low-cost method of monetizing video content and increasing viewership, but Edge Video also introduces valuable methods for increasing relevance while increasing viewer interactivity. So, if you are a publisher with a large library of content, dynamic auto-channel surfing is a great way to provide your viewers with a consistent viewing experience and increase viewing time before and after the live streaming.

Theta and Livepeer, two blockchain-based video streaming platforms, have already gained traction in the industry. In theory, that is encouraging news. The drawback, however, remains those existing solutions require a user level of technical expertise to provide a seamless viewing experience that can be challenging. Furthermore, some solutions are distinguished by a lack of interactive and discoverable content, a lengthy adoption of proprietary CDN, and node complexity. A system architecture that allows for a built-in decentralized Content Delivery Network (CDN) with Watch2EarnTM functionality for a better and more efficient delivery chain is required to achieve a distributed, decentralized, and tamper-proof multimedia blockchain framework (from content production to transmission and consumption).

The P2P multi-video streaming platform has established a network of industry partners. Visionary partners like Bloomberg TV and World Poker Tour contribute to the vision that Edge Video has already created and promises to develop a streaming platform that the entire world can enjoy. Joe Ward has earned the right to be the face of a rapidly changing industry, learn about Joe, Edge Video, and more here.

The world is calling for change and Edge Video is answering the call. Web3 continues to pique global interest, and viewers want to be a

Crypto Airdrops: all you need to know

You will undoubtedly be familiar with the question, “what are Crypto Airdrops?”. Investors, crypto Twitter handlers, and influencers alike advertise crypto airdrops to their followers.

Watch2Earn: everything you need to know about the Edge Video key functionality

Watch2Earn on the EDGE Web3 Video Network is revolutionizing the streaming experience. Despite the success of live video streaming on web 2.0 platforms such as

Subscribe to be informed about token sale in advance